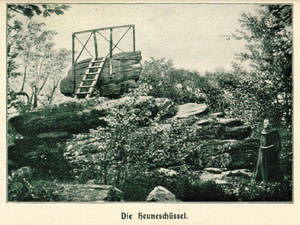 The origins of the Engelberg pilgrimage church go back to pagan times. A nearby hill called Rulesberg and a huge boulder with a bowl-like indentation called the Heunenessel bear witness to what was once a Wotan cult site.

The oldest historical evidence for a Christian sanctuary dates from 1406 and was issued by the cardinal and papal legate Julianus, bishop of Ostia. Its content is the granting of an indulgence: “The most gracious virgin, ... is particularly honored in certain places, from which the faithful derive great benefit for their salvation. We now want the chapel in Monte Angelorum, called auf dem Engelberg... to be properly repaired, prepared and maintained..."

The history of the Engelberg

above the Main, then called “Rulesberg”, goes back to the pre-Christian era. At that time there was a pagan place of worship there, of which the so-called “Hünenstein” or “Heuneessel”, a huge boulder with a bowl-like depression, still bears witness.

Around 1300 a simple wooden chapel was built on the mountain and dedicated to Archangel Michael. As the leader of the heavenly hosts, he was the preferred choice for church patron at the sites of former pagan sanctuaries. So the old “Rulesberg” gradually became the “Engelberg”. At the beginning of the 14th century (1310 is mentioned), a statue of Mary was placed in the chapel, which is still venerated there as a miraculous image and is the destination of pilgrimages.

The double worship of the Archangel Michael and the Mother of God Mary, as “Queen of Angels”, is the origin of the local pilgrimage. Its oldest authentic document, the content of which suggests a heavily frequented chapel in need of repair, dates from the year 1406.

As the number of pilgrims increased, the Archbishop of Mainz Anselm Casimir Wambolt von Umstadt , to whose district the area belonged at the time, brought the Capuchins to the Engelberg in 1630 and had a monastery built for them. The first documented Marian altar of grace was donated in 1692 by General Jakob Alfons Franz Calderon d’Avila , who was also buried in the monastery church in 1695 and whose tombstone has been preserved there.

In 1828, by order of King Ludwig I of Bavaria , the monastery was taken over by the Franciscans of the Bavarian Franciscan Province .

In 1865, Volume 1 of “Pictures from the History of the Church” published the story “Maria Regina” by Countess Ida Hahn-Hahn , which is about the Engelberg monastery above the Main.

Burial place of the princes of Löwenstein-Wertheim-Rosenberg

Since 1724 the Engelberg monastery has been the burial place of the Wittelsbacher Lateral line of the princes of Löwenstein-Wertheim-Rosenberg , which since 1721 Löwenstein Castle nearby Kleinheubach reside, in which there is also a castle chapel, which was formerly provided by the Capuchins of the Engelberg monastery. Originally the dead were buried in the Engelberg monastery church; In 1840, the princes had a separate crypt chapel built for their family on the monastery grounds, which is still used today as a family burial place. In the monastery church itself is the epitaph of Prince Ludwig Carl Franz Leopold zu Hohenlohe-Waldenburg-Bartenstein , a relative of the Löwensteins who had a carriage accident in 1799 and died in Kleinheubach.